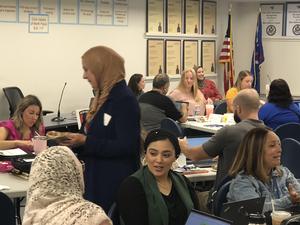 Some were newly-minted college graduates excited about starting their careers as teachers and some were veterans with years of experience on their resumes.


But what this group of educators had in common was they were joining a team of highly motivated, data-driven and student-oriented educators in North Palos School District 117.


New teachers were replacing staff who had either retired or left the district while a handful were filling newly created positions.


Monday was Day 1 of a week-long New Hire Week in District 117 where the new employees would learn about the district’s mission, culture, philosophy and just about everything else that drives the district to be one of the most successful school districts around.


Kevin Buscemi, the former principal at Oak Ridge School who now serves as the district’s Recruitment and Retention Coordinator, welcomed the new staff and started the morning with an ice breaker that asked them to talk to someone at their table, find out a little bit about that person and share that information with the rest of the group.


Supt. Jeannie Stachowiak then shared with the group information about the district and just how difficult it is to get a job in North Palos District 117.


“We are happy you are here,” she said. “Thank you for picking us.”